Last week HB112, the bill to ban trans kids from participating in school sports, sponsored by Rep. John Fuller of Whitefish, passed through the Senate. The bill will now make one last appearance in the House before it heads to the Governor’s desk — its last stop before becoming law. SB215, the Religious Freedom Restoration Act, which could allow discrimination in the name of religious freedom, is on the same path. As these bills inch closer to becoming our reality, we want to be very clear: Montana is better because of trans people.

These hearings and debates have been full of hateful, ignorant speech. Proponents have spread dangerous misinformation about trans people. They have tried to send the message that trans people, especially trans children, are not welcome to live as themselves in Montana. We reject that message. We’re going to keep raising hell about these bills and we also want to send a clear signal that trans kids are valued members of our communities who are deserving of joy, care, and love.

If you identify as LGBTQ2S+, consider submitting art, writing, or a letter of support to our upcoming zine, Transcendent Joy. If you need to be with other trans folks right now or if you are a parent of a trans, nonbinary, or Two Spirit child and want to talk with people who understand, email paxton@mhrn.org for information about support groups facilitated by the Montana Gender Alliance. If there is other support you need and can’t find, or if you have dreams for what community support could look like moving forward, contact Izzy at izzy@forwardmontana.org. We take care of us.

Indigenous people finally won the right to vote less than a century ago, after decades of advocacy. But Native American voters continue to face significant barriers to the ballot box in Montana.

Over the past few weeks, HB613, the Native American Voting Rights Act (NAVRA), was whittled down significantly in an attempt to negotiate between the bill sponsor, county clerks, and Tribal governments. In its compromised form, HB613 lost support from a few tribes and initial proponents, and ultimately died on the House floor.

Rep. John Fuller of Whitefish spoke in opposition to NAVRA though he wasn’t even able to articulate his reasoning, stating “I have some angst regarding the bill, and I’m not sure where it comes from.” Interesting… Could it be that your “angst” comes from a need to hold onto your white power and privilege? Just a thought.

We’d like to acknowledge the bill sponsor — Rep. Sharon Stewart Peregoy of Crow Agency — and Western Native Voice for their care and perseverance with the effort.

HB613’s tough journey through the legislature reflects the systemic settler colonialism and white supremacy that keep Indigenous voters from exercising their right to participate in democracy here in Montana.

A tale of voter suppression

BUT then came the year 2021, when legislators decided to strike down same-day voter registration via a dastardly bill called HB176. To make matters worse, many of our elected reps also chose to support SB169, a bill to enact stricter voter ID requirements and make it harder for Montanans — especially students — to vote. These bills are now journeying to the Governor’s Office where they will very likely be signed into law.

Here’s where you, dear reader, come into this story. Send Governor Gianforte a message, and ask him to veto these two bills. Remind him that by signing these voter suppression bills, he’s ignoring the will of Montanans.

We’d also be remiss if we didn’t mention a ridiculous bill attacking our friends and partners in voting rights work, MontPIRG. HB689 attempts to place redundant reporting requirements on organizations that rent space from the Montana University System. Groups like MontPIRG are already required to report on their activities and this bill is nothing but a nefarious attempt to make student groups jump through more hoops. Contact your representative and tell them to focus their efforts on issues that ACTUALLY matter to constituents.

Rolling in the debt

You probably don’t need us to tell you that student loan debt is an issue, but #DYK Montana has some of the fastest growing student debt balances in the nation? From 2007 to 2017, Montana residents experienced a 55% increase in student debt. At this rate, we’re wondering how higher ed will ever be affordable.

HJ25, introduced by Rep. Sarah Novak of Anaconda, would have established an interim study group to examine the historical context of student loan debt, analyze the impacts of tuition freezes and federal loan programs, and look at the outcomes of measures implemented by other states before the next legislative session in 2023. This could’ve been a step in the right direction to force our legislators to reckon with the burden of student debt on young people and our economy. However, like several other bills this session, HJ25 did not get very far.

We’ve heard ridiculous arguments from legislators about how students have “chosen” to incur debt. Someone please tell them nobody chooses to bury themselves with insurmountable debt. Even when attending a state school and working, most students will need to take out significant loans by graduation. Montanans should not be punished for pursuing higher ed.

**Cue Bernie Sanders voice** Healthcare is a human right! Ah, if only everyone thought like Bernie. Unfortunately Sen. Cary Smith of Billings and Rep. Jane Gillette of Bozeman do not.

They have introduced SB100 and HB676 (respectively), which would increase barriers to healthcare, especially for low to middle-income Montanans. These bills would make it harder for folks to qualify (and remain qualified) for programs like Medicaid and the Supplemental Nutrition Assistance Program (SNAP), and ultimately increase the number of uninsured — and unsupported — Montanans across the state. Catch us screaming at yet another attempt to hang our most vulnerable communities out to dry.

In the midst of a public health crisis, and honestly all-the-f*cking-time, it’s disgusting to see our leaders reducing access to necessary public support programs. Legislators are elected to advocate for their constituents. You tell us — are they doing their jobs?

Tell House Human Services Committee to think about the last time they needed to make a medical decision and reject SB100 and HB676. After you’ve sent a message to the committee, take a second to make sure you’re signed up to #SeeJaneGo. It’s clear our former Villain of the Week is only out for herself.

We won’t back down

Remember the Dakota Access Pipeline (DAPL) protests? In 2016, Indigenous activists from Oceti Sakowin (the Sioux Nation) came together to protest the DAPL where it was under construction on treaty lands near the Missouri River, just north of the Standing Rock Sioux Reservation. Over months of struggle, the protest grew into the internationally-known Standing Rock Movement.

HB481, sponsored by Rep. Steve Gunderson of Libby, is a response to that movement. It introduces additional steep penalties for trespassing and/or vandalization of energy infrastructure: if you’re found to cause damage over a certain threshold, you could be hit with a felony charge punishable by fines up to $150,000 or 30 years in prison. In short, this is a brazen attack on our rights to peaceably assemble in support of a sustainable and equitable climate future.

The fact is, the Standing Rock Movement scared big oil, because it showed how powerful people like you and me can be when we organize. The fossil fuel industry is worried, and that’s why legislation like HB481 is showing up all across the country. But we aren’t intimidated, and we won’t back down.

Contact the Senate Judiciary Committee and remind them of this little thing called a First Amendment right — and to vote NO on HB481. 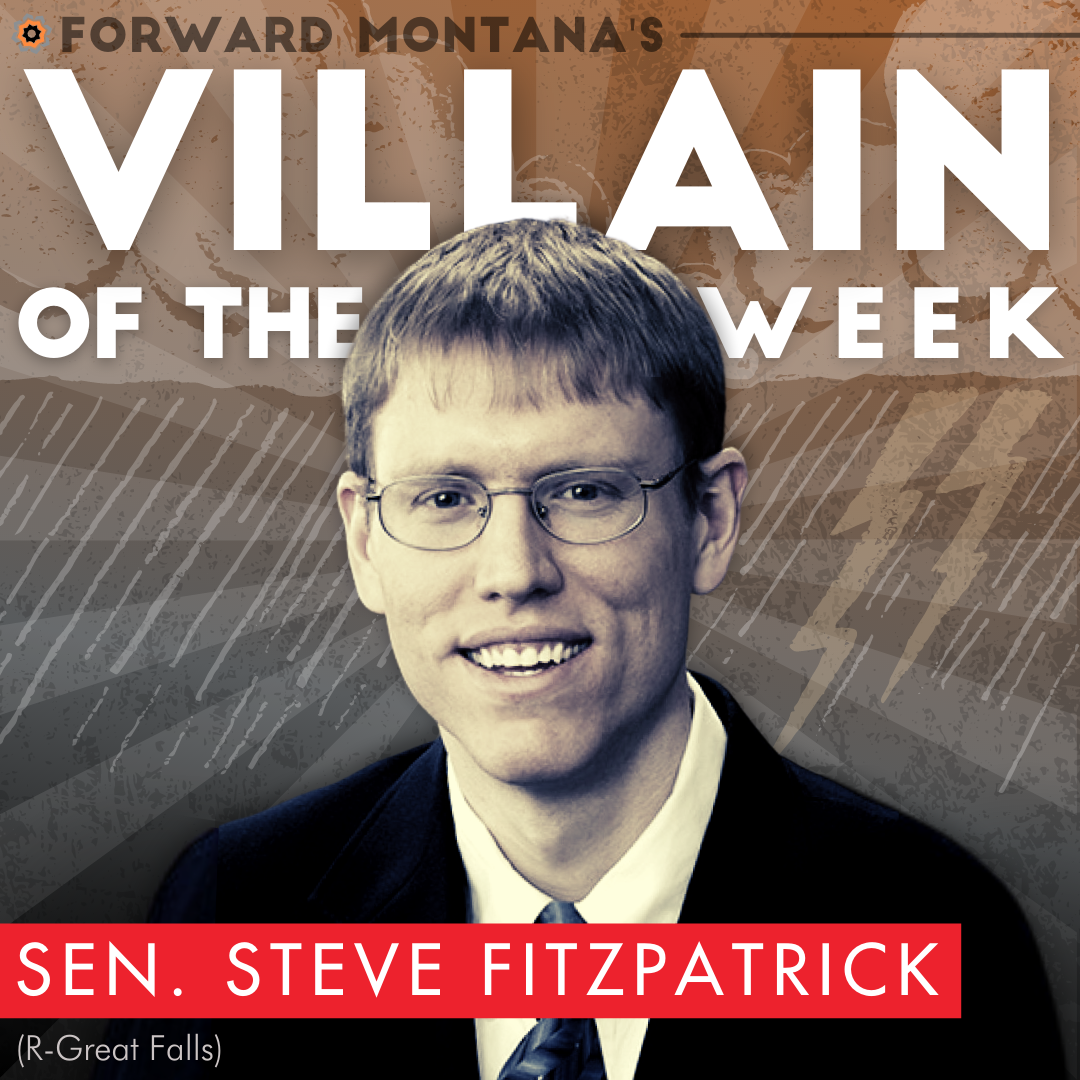 You know what really grinds our gears? Legislators who seem to care more about corporations than their own constituents. Well, Sen. Steve Fitzpatrick of Great Falls has a major love affair with corporate interests. This week, he brought forward SB379, a dangerous bailout bill that would cost Montana households $700 per year. We’re not joking.

Here’s a SB379 refresher: this bill would force NorthWestern Energy’s customers (this is you!) to foot the bill for Unit 4 of Colstrip, a 35-year-old coal-fired electrical power plant in Montana on its last dirty legs. The total cost? Approximately $1.9 billion.

Sen. Fitzpatrick used his opening argument to vilify feedback from the Public Service Commission (PSC), the elected body that regulates NWE. The PSC identified outrageous costs that would fall on consumers, covering Colstrip’s operation, reclamation, remediation (the list goes on) if the bill were to pass. Rather than address their concerns, Sen. Fitzpatrick came after the PSC’s competence, claiming their math was incorrect.

As it turns out, Sen. Fitzpatrick’s father was NWE’s main lobbyist for years. Here’s a message for Sen. Fitzpatrick: since you do a better job representing NWE’s interests than the actual people of Montana, why don’t you quit your day job and follow in your father’s footsteps? Contact your senator ASAP and let them know SB379 does not speak for the interests of Montanans.

Last week, Sen. Pat Flowers of Belgrade stepped up to uphold the rights of trans Montanans.

In the midst of a contentious floor debate on HB112, the bill to ban trans athletes from participating in sports that align with their gender, Sen. Flowers admitted that as an older cisgender white man and a sports fan, he, too, had initially been inclined to support these bans. He changed his mind, though, when he did what very few in the legislature seem to be willing to do: spoke with and listened to people who would actually be impacted.

Sen. Flowers shared a letter opposing HB112 signed by over a hundred Montana women athletes. And reminded his colleagues this bill addresses a non-issue in Montana, emphasizing that not only is it a solution in search of a problem, but that the bill will become the problem.

Legislators have a duty to listen to the people whose lives they are legislating; Sen. Flowers, you have done just that. We appreciate your transparency, and it gives us hope to know that minds really can be changed. Thank you for being a voice of reason.

Deep breaths. Drink water. We will get through this. We’ll see you next week.